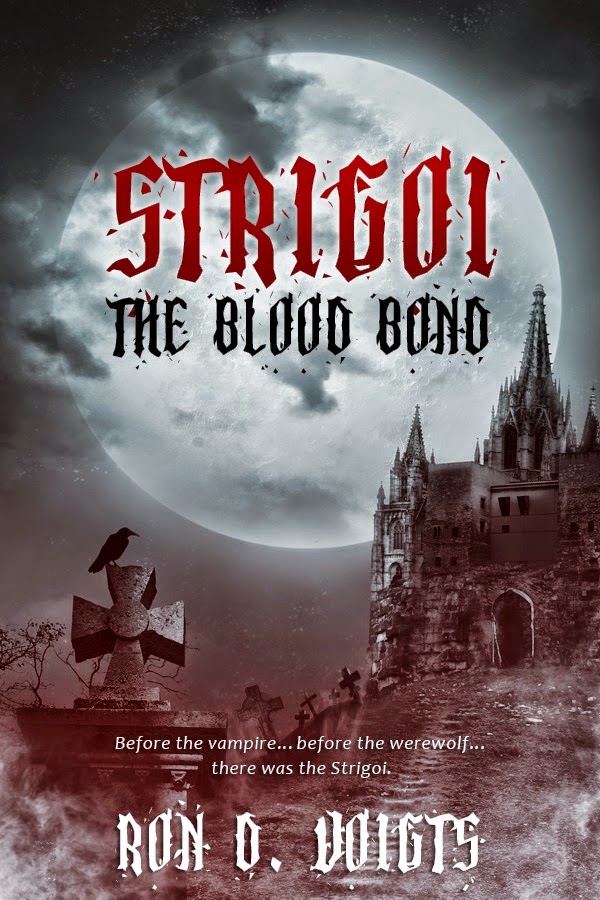 On the verge of suicide after his wife leaves him, Alex Regal learns he has inherited property located in a small town deep within the mountains. Putting things on hold, he heads to Glade, hoping for something positive in his life. Getting there is easy but leaving proves to be impossible. A spell exists, keeping everyone captive in this hidden place.

The town of Glade is run by a Shapeshifter called the Strigoi. The creature needs to drink human blood to survive. In folklore, taking the form of a man or an animal, the Strigoi became the basis of stories about vampires or werewolves. Now Alex must discover a dark secret before he becomes the vampire's next meal.

Excerpt 1:
Maggie awoke in darkness. She blinked. Inky black filled her vision. She recalled the stag standing in the road, losing control of the car, and the accident.
She tasted salt and metal. Her lower lip felt fat. A dull pain throbbed at the side of her head. She slid her fingers across her scalp and felt a bump.
Her hand shook as she reached out and touched the steering wheel. She ran her fingers along the column and felt the keys dangling in the ignition. The engine no longer ran. Moving farther, she touched the headlight switch and turned it.
The world lit up in front of her. The car had nosed into a tree. The headlight beams didn’t travel too far, absorbed by the brush, nearby trees, and the night. The dash clock read 2:13.
By best estimate, Maggie had been knocked out for about ten hours. Hopefully only that. She didn’t feel too bad except for the pain radiating from the bump on her head.
Now came a decision. Leave the car and head down the road, or stay?
A black shadow passed in front of the car lights. If she’d blinked and she might have missed it. Possibly the night playing a trick on her eyes.
Something hit the car hard. The vehicle rocked for a second and then grew quiet. Maggie held her breath and listened. All was silent like before.
Above her, something moved on the car’s roof. First, the sound came as gentle thumps, like someone walking above her. The noise grew louder. Pounding and scratching. Maggie realized whatever had leaped atop the car meant to claw its way in.
“Stop,” she screamed.
The sound became intense, the action more violent.
She cupped her hands over her ears and screamed, “Please, stop.”
Another boom came from overhead. A silhouette passed in front of the car lights again and vanished into the darkness. Maggie wondered if it had left.
Then the shadow appeared again, she heard a crash, and the left headlight went dark. Maggie thought this could not be happening. Things didn’t happen like this in the real world. Another crash and the right light went out.
The only light in the car came from the dashboard. Whatever was outside could see her by the glow. Her fingers fumbled for the switch, twisted it, and darkness once more wrapped around her.
Her breaths came in short pants. Her heart pounded in her ears. Her eyes opened, her eyes closed—the darkness remained the same. Minutes passed without a sound. The quiet grew unnerving.
What had it been? She’d heard of bears attacking vehicles. Certainly that would explain the agility and size of whatever it had been. But did bears come out at night?
A sickening feeling overwhelmed her—she was not alone. Something still remained outside, perhaps only feet from the car. She had not heard anything for a while now. Reason said it had left, but she knew it hadn’t. Whatever was outside waited for her.
She raised her hand and touched the underside of the car’s roof. Her fingers dragged across the surface of the liner, sweeping in gentle arcs until she found the dome light. Her fingertip slipped over the rocker switch.
A cold feeling washed over her. Her imagination played with her. If she pressed the switch and lit the interior, would something be outside, waiting? Would that be the trigger to provoke it?
When she could no longer stand it, she pushed. Light flooded the inside of the car. Nothing happened. She was alone. The light soothed her and kept the darkness away. The night had no power over her.
Then it hit the windshield. Fur pressed against the glass. A patch of fog wafted from the nostrils of a black nose. Fangs glistened in the light. Two red eyes stared at her.
Maggie pushed on the steering wheel, and the sound of the horn blared.

For the next hour, I laid in the armchair, trying to sober up while listening for the typical noises of the night. A barking dog. Crickets chirping. Tree frogs croaking. But the air had been devoid of any sound except the ticking of the clock. Then something outside thudded.
I pulled back the drape and peeked out the front window. The dim light of the desk lamp made it difficult to see anything, except my own reflection. I reached for the lamp’s switch, hesitated, and then turned it, plunging the room into darkness.
An impenetrable gloom surrounded me. If I focused for a moment, I could see the outlines of things outside, but the exact shapes remained indiscernible. The silhouette of a tree loomed just to the left. The edge of the fence contrasted against the road. Shrubs dotted the grass along the front walk. But did I really see them or did my imagination put them there? Perhaps the noise I heard earlier was just another trick of the night, or a product of my ability to fill in details.
But something moved. A figure so dark it contrasted even against the shadows of the night. The movement made me think of a cat, but the size would make it a lion or something larger. In an easy bound it leaped, cleared the fence, and landed effortlessly in the yard.
My heart raced. I glanced at the front door to be sure I had pushed the two double bolts in place. The size of the creature outside left little doubt that it could easily crash through the door and get inside.
For a moment, the beast seemed motionless, and I wondered if my imagination had played another trick on me. Tired eyes. A long day. Too much to drink. Perhaps I only thought I saw something, and the outline near the fence was a cluster of bushes.
But then it moved again, stepping slowly toward the side of the house as if taking in the surroundings, surveying the place. The dark form vanished, and I realized it was headed for the backyard.
I bolted for the kitchen. My right leg caught the desk chair and knocked it over. Books lying on the floor flew as I kicked them. I aimed for the dim rectangle that was the doorway to the kitchen. Keeping my hands outstretched, I found the kitchen table and maneuvered around it. I peered out the back door’s window, frightened by what might look back.
In the dim glow, I could see the chopping block, the wood pile, and where the forest’s edge began. Then the creature appeared, taking easy steps. The shape reminded me of a dog of an enormous size. The largest dog I’d ever seen was a mastiff, and this creature easily dwarfed that breed. The only thing bigger was a wolf.
I thought of the handgun in the box back home and how I’d almost ended my life with it. I’d put it back, thinking how stupid the idea had been. I’d vowed never to touch it again. Now I wished I had the gun.
When the wolf reached midway between the house and forest’s edge, it paused, turned its head, and stood motionless. I wondered if it saw me through the window pane. Not sure, I stepped back until I was out of sight.
Would it come toward the house? Burst through the door? My heart hammered hard. I felt a bead of sweat trickle down the side of my face. The air felt cold and clammy. When I could no longer wait, I stepped forward and looked outside again.
The creature was gone. 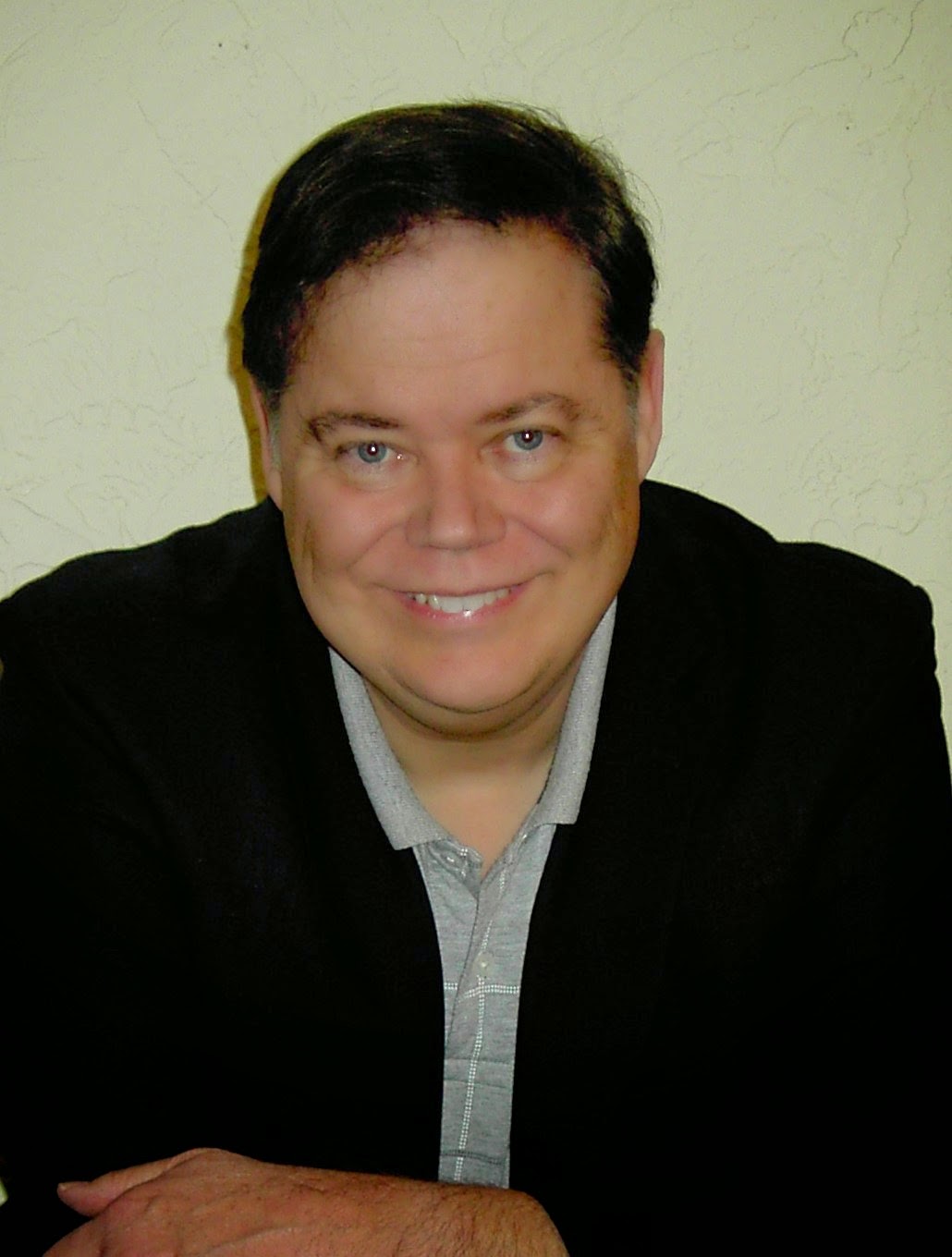 Originally from the Midwest, Ron D. Voigts now call North Carolina home where he and his wife have a small house off the Neuse River. Ron’s writing credits include the Penelope Mystery Series for middle-grade readers and the dark mystery thriller, Claws of the Griffin.  His reading taste is eclectic and depends if the first sentence captures his interest. When not writing and reading, he enjoys watching gritty movies, cooking gourmet food, and playing games on his PC.

https://www.goodreads.com/RonDVoigts
Posted by Tanya at 6:00 AM

Tanya
my name is Tanya and I live with my daughter. I have been crafting forever and love every minute of it :) When I'm not crafting you can usually find me with a book in my hands.